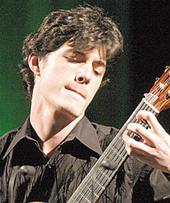 Gabriel BIANCO IN CONCERT
Classical Guitar Concert
French guitarist Gabriel Bianco, winner of the Guitar Foundation of America’s International Guitar Competition will be offering a concert on Saturday, January 16, at the Episcopal Church Center of Coral Gables as part of the Miami Classical Guitar Society’s International Masters and Laureates Series.
The concert begins at 8:00 pm and will include works by Fernando Sor, Franz Schubert, J.S. Bach, Joaquin Turina, and Giulio Regondi.