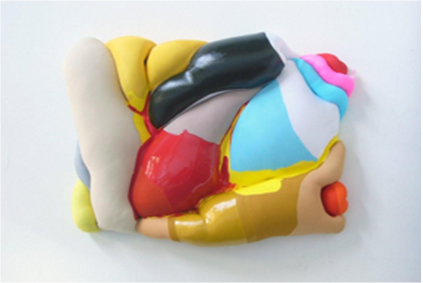 Diana Lowenstein Fine Arts is pleased to announce the solo exhibitions of Clemencia Labin and Paula Otegui. The opening reception will take place on October 31st from 7:30-10pm. This event is free and open to the public. Exhibitions will be on view through November 25th, 2009.

CLEMENCIA LABIN â€“ Doping Pulpa
The art that Clemencia Labin has been working on for the past few years is brimming with moisture, fragrance and colour. It oozes tropical splendour and also winks playfully at creatures of the far-off, imaginary land of childhood: cuddly toys. The fabrics chosen by Labin in her work, cloths of all kinds with soft filling, are the same as those used for teddy bears. This element of tenderness which is connected to all things soft, snug and spongy, gives her work a warmth quite rare in the cynical, disbelieving world of contemporary art, so used to exploiting the darker, seedier side of culture.
LabinÂ´s work not only strikes a note of tenderness, but also of fun, evident in titles such as Pulpa Chic and Doping Pulpa. Her art exudes a sense of ease and a healthy attitude of not taking itself too seriously, while simultaneously providing an in depth study, full of sensuality, tenderness and respect, working the materials with such expertise that her creations become surprising objects, in the purest sense of the word.
Her sense of fun is fully apparent in her creations, which constantly challenge formats and concepts. Are they wall sculptures or paintings with a three-dimensional element? Are they cuddly toys or are they to be admired forever on the wall of a gallery or museum?
Much is said about the influence of Pop Art in ClemenciaÂ´s work, but that is somewhat questionable. LabinÂ´s work makes use of the ease, the humour and the colouring associated with Pop Art, but differs from it in that it is free of the inherent cynicism connected to that movement.
This exhibition takes place in an architectural space which is an elongated prism in shape for which Labin has designed an all-encompassing show: in other words, she uses the space as an interior designer or an architect would. She does not merely â€œhangâ€ or position her pieces, but plans out meticulously how she is going to use the whole space.
Originally from Venezuela, Clemencia Labin studied at Columbia University and currently lives and works in Hamburg, Germany.

Project Room
PAULA OTEGUI â€“ Metaforas de la naturaleza
Paula Otegui was born in Buenos Aires, Argentina, where she studied at the Escuela Superior Ernesto de la CÃ¡rcova, Instituto Universitario Nacional de Arte, as well as the Escuela Nacional de Bellas Artes Prilidiano PueyrredÃ³n. Her work has been exhibited internationally since 1995. She is the recipient of numerous awards and distinctions. Her intricately detailed paintings depicting a natural, yet fantastical world, are featured in the Project Room. As mirrored in her work, Otegui believes the world can be a complex sum, sometimes pathetic. The essential exists in the interactions. Everything occurs simultaneously, while the effects are infinite.