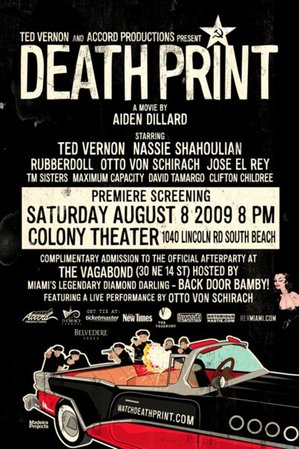 Local film Auteur and fitness dude, Aiden Dillard’s film Death Print is getting another Premiere showing , this time over on South Beach’s Colony Theatre, right in the heart of Lincoln Road. This piece of cinema mayhem has many local musicians and people about town starring in it. Look for Nastie, Cuci Amador, Otto von Schirach, Clifton Childree, Jose le Rey, Lolo, the TM Sisters, Thug Jesus and a host of others throughout. The film stars Ted Vernon Rubber Doll as well as a turn at villainny from Nassie Shahoulian. It is a revenge/murder-mystery and homage to Charles Bronson’s films of the same type. There will be an afterparty at Back Door Bamby (30 NE 14th Street) after the screening, with a live performance by von Schirach.

The Premiere Screening goes down Saturday, August 8 at the Colony Theater, 1040 Lincoln Road (Right next to Segafredo), Miami Beach.