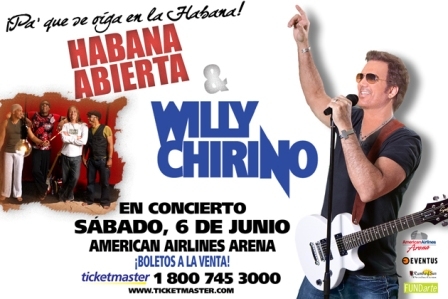 EVENTUS, in collaboration with FUNDarte, are pleased to present the renowned Cuban ensemble Habana Abierta. The band, which is based in Madrid, will appear for a one-time-only engagement next Saturday, June 6th at 8:00 p.m. at the American Airlines Arena, located at 601 Biscayne Blvd, Miami as the Opening Act at Willy Chirino’s concert.
Habana Abierta emerges from the creative resurgence that took place in the city of Havana in the early 1990’s, when a new generation of composers, musicians, visual artists and writers were paving a new cultural scene in Cuba.
Habana Abierta arrives to Spain in July 1996 and from that point on they have made an impact in the Latin musical scene drawing the recognition and admiration of internationally renowned musicians and writers, such as Ana Belen, Victor Manuel, Ketama, Tomasito, Ana Torroja, Raimundo Amador, among others. Habana Abierta has already three productions under its belt: Habana Abierta. 24 Horas (24 Hours) and Boomerang; all three albums have defined Habana Abierta’s sound which are full of musical innovations that defined their debut release, consolidating a new style of Cuban pop, rock, evocative of the musical styles of Los Van Van, Irakere, NG La Banda, Red Hot Chili Peppers and The Rolling Stones.
On June 6th , at the biggest venue in Miami, American Airlines Arena, Habana Abierta will join Miami fans once again as an opening act for Willy Chirino’s International Tour Pa’lante. They will bring us an evening of high-voltage World Cuban music -from Habana Abierta to Boomerang, in addition to some new themes.
Ticket prices for this one-of-a-kind concert are $128 to $58
Tickets may be purchased at ticketmaster: www.ticketmaster.com or by calling (305) 358- 5885