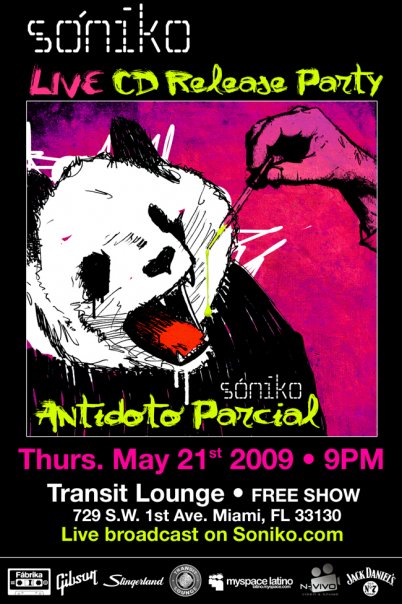 After their successful debut album “KombustiÃ³n”, which gave them 3 MTV EspaÃ±ol Buzzworthy videos, concerts at LAMC, SXSW, Billboard Latin Music Conference and tour dates in California, NYC, Texas, N. Carolina, etc., SONIKO is back with an explosive new relase with the title of “ANTIDOTO PARCIAL”

2- For all of you not in Miami we will have a Live Broadcast of the show starting at 10PM Eastern time on http://www.soniko.com thanks to our friends of N-VIVO

SÃ³niko is the creative sonic experience conformed by Alex Izaguirre, Javier GÃ¼ell, Jorge GarcÃ­a and Toto GonzÃ¡lez, rooted in Miamiâ€™s underground spectrum of various musical tendencies. The 90â€™s Grunge, Brit Pop, a decisive base of Rock en EspaÃ±ol, and fine arrangements of electronic variations mainly influence their sound and style.
In SÃ³nikoâ€™s first album â€œKombustiÃ³nâ€, their four members took on the enormous task of producing and working with renowned Grammy award winner Marcelo AÃ±ez (Shakira-Unplugged & ThalÃ­a), who put the final touches and reaffirmed the band’s desired sound.
A CD that got them 3 MTV EspaÃ±ol top ten videos and concerts around the USA including SXSW, Latin Alternative Music Conference and Billboard Latin Music Conference among others.

SÃ³nikoâ€™s second album “AntÃ­doto Parcial” shows their growth as composers and it’s evident in a collection of 12 excellent tracks. On this occasion, the band decided to bring back the locally acclaimed “Laberinto” which wasn’t released in “KombustiÃ³n”, with the special appearance of Gabriel from Minimal joining Alex on vocals.
The band will celebrate on May 21st at Transit Lounge the release or their new album in Miami with a free event supported by Myspace Latino, Jack Daniels, Gibson and FÃ¡brika. This event will be special because SONIKO will do a live Internet broadcast for all their fans and friends outside Miami. This live broadcast will start at 10PM Eastern time at www.soniko.com
Since their origins in 2002, SÃ³niko is one of those bands that have triggered Miamiâ€™s interest in indie rock in both the Anglo and Latin community. Their local success has reached out to other places such as California, New York, Georgia, Texas and Puerto Rico. Through Fabrika, Myspace, Facebook and several other music related Internet sites, the band has built up a strong international fan base, which is awaiting the moment of Soniko’s powerful live performance to be back and also to be seen for the first time.