Thursday’s VIP Sneak Preview of Robert F Merton ‘Temperatures’, presented by Artoconecto, will feature North One10 celebrity chef Dewey LoSasso on food AND wine, and WVUM’s ‘Vamos a la Playa’ DJ Laura on tunes. The Design District is popping! There is plenty of parking, and there is even valet parking right down NE 39th St. in front of Brosia. Please RSVP if you haven’t already-we expect an overflow crowd and want to make sure everyone gets to see the artwork, etc. The web invite is attached. If you desire more info, please go to www.artoconecto.blogspot.com or www.robertfmerton.com to preview Rob’s paintings 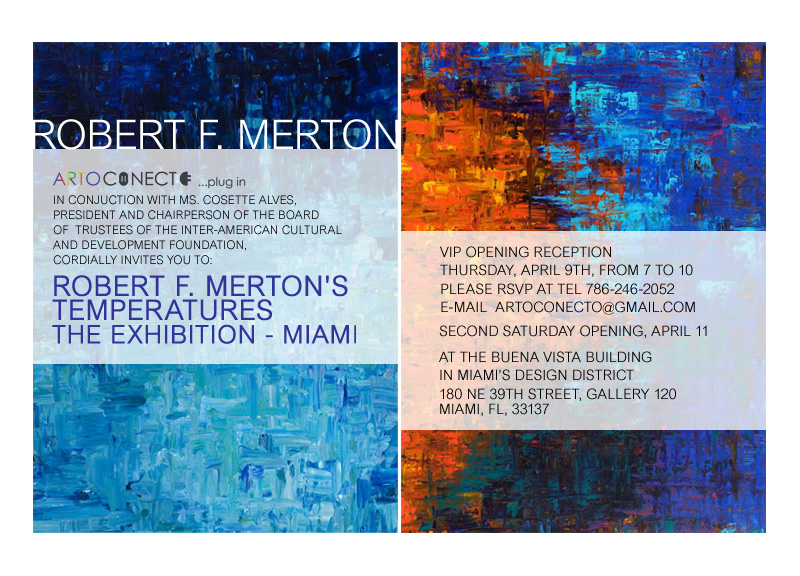 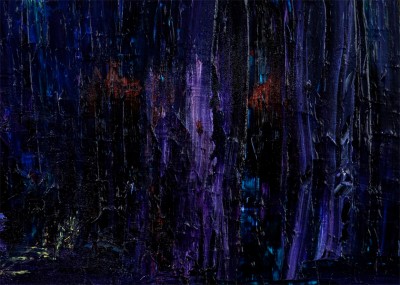 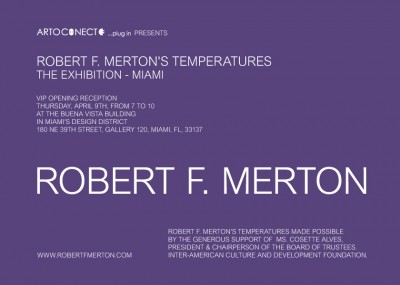 Artoconecto is excited to present painter Robert F. Mertonâ€™s first solo exhibition â€˜Temperaturesâ€™, on Thursday, April 9, 2009, for a sneak VIP preview, followed by an exhibition open to the public on Saturday, April 11, at The Buena Vista Building in Miamiâ€™s Design District. The painter, who resides in the colder climes of New England, in the seaside village of Cohasset, will unveil his exciting new work in the tropical climate of Miami, where his work has received considerable early attention. His vibrant work, like his family name, demands historical perspective-his grandfather, Robert K. Merton, was a groundbreaking sociologist, who coined terms like ‘self-fulfilling prophecy’, and ‘unintended consequences’. His father, Robert C. Merton, won a Nobel Prize in economics in 1997 for his work on a new method to determine the value of derivatives. And his own study of 15th-17th century European history, when a human-powered economy evolved into a mechanized economy (and a mechanized society), has influenced his understanding of the transitions through which society and its members must evolve. “The transition period is what interests me,” says Merton. “We are in an era of change, and we must embrace that.”
Perhaps the natural progression of generations, from preeminent sociologist, to Nobel Prize winner, to visual artist, to whatever the future may bring for the youngest Merton, his son, Robert A. Merton, not only defines Robert F. Merton’s work, but bestows upon it its enduring resonance. “Not everything has an immediate ’cause and effect’. But everything in the past has an effect on the present.” Through his exacting work he alludes to the creative sweep of time; but Merton remains firmly rooted in the present, while acknowledging the ever-evolving and challenging journey towards our future.
Artoconecto, the dynamic arts non-profit based in Miami is adding a new layer to its mission statement of promoting emerging artists with Robert F. Mertonâ€™s Temperatures, by providing one artist with the tools to prepare for their first solo exhibition. â€œWe would like to be able to create the first solo show for artists whose work we believe in; and who also have the drive, the talent and completed works ready to exhibit, but have not yet been approached or selected by a commercial galleryâ€, says Alexandra Rangel-Brody, Executive Director for Artoconecto, which has been operating since 1999 in Washington, D.C.
Robert F. Mertonâ€™s Temperatures is made possible by the generous support of Ms. Cosette Alves, President and Chairperson of the Board of Trustees of The Inter-American Culture and Development Foundation and the support of Dacra. For more information, please visit www.robertfmerton.com