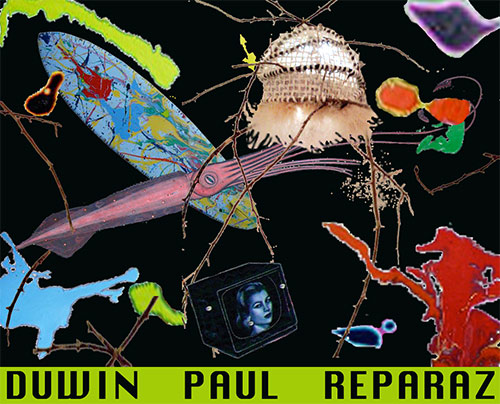 For The First Exhibition Of The New Year, Artformz Brings Together An Eloquent Collection of Art Work

Natasha Duwin, Ray Paul & Natalia Reparaz
exhibit their latest work presenting ideas and personal viewpoints on critters, creatures,
amoeba and the mystery of life that surrounds us everyday in our dreams, under our
skin, or along the forest path.

Natasha Duwin – Multimedia Installations in the Project Room.
Duwin’s earthy and ethereal “nest objects” have come to life in her installation “The Rest is Silence”. The title refers to the last line of the Shakespearean play “Hamlet”. In the artist’s words, “The idea is that my nests have come to life, they have abandoned the walls and hang, mid-flight, as spiders do, at different heights.” Duwin has transformed the Artformz project room into an environment that is pristine and white. With-in one hears faint, insect-like sounds – a primeval ecosystem that is also an antiseptic place, one that is populated by these strange objects that have an internal light projecting strange shadows. The installation is a play of contrasts, between the detached environment and the warmth of the critters, between the thorns of the twigs and the softness of the feathers, and between the separation of every “critter” from each other and the reaching out of their branches, and then the wholeness of the installation itself.

Ray Paul – Expanded painting – acrylic and enamel on canvas, wood and suspended surfboard.
Paul’s abstract, action paintings echo the surfer’s world. Rock music plays in the background, while the quite of an under water world of currents and eddies, teaming with any sort of microscopic organisms floats on the surface. The artist began as a biologist and his vision of the world is at once vast as ocean waves, and then again, as finely tuned as the view through a microscope. He states, “I believe the creative process must be preceded by some primordial urge, some instinctive need. This is followed by the desire to reach a state of child-like innocence, and thus the condition of the primal shaman. In this uninhibited emotional realm, the seed of a work of art is created. This seed is fertilized by the subconscious and brought to the embryonic level. Here, the conscious, which consists of intellect, reason, experience and the decision making process, attains control, nurturing and developing the embryo into maturation. The result of this process is a work of art.” Paul takes the accidental flow or splash of paint and then out of the chaos of this creation appear shapes and organisms over which he brushes intricate level after level of rainbow-effect layers. His painting surfaces come alive with all sorts of what appear as swimming/floating life forms, existing in a hyper colored universe.

Natalia Reparaz – Large-scale mixed media paintings.
Reparaz presents a monumental, two-dimensional piece depicting a giant squid that converges with the human race in surreal and extraordinary ways. In Reparaz’s work one sometimes see the possible influence of the work of Remedios Varo. Reparaz uses the female figure, or better stated, “woman” as a historical symbol, placed in the status quo of society’s positioning, and portrayed often as a central object in commune with, or struggling with, the order of power and sexual identity in the world surrounding her. Her figures, erotic and symbols of the threatening “femme fatale” are paired with all sorts of odd creatures: squid, lizards, crabs, the male species, even electronics, all leading the viewer into the artist’s realm of mystery and dreams, full of desire and forbidden places.