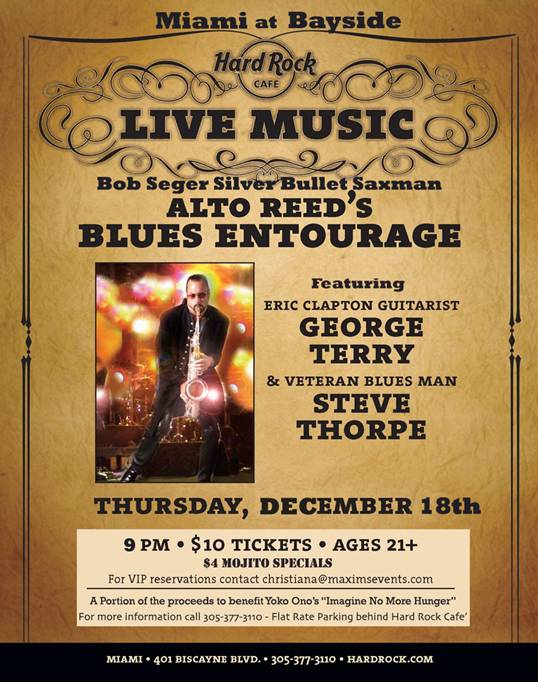 After coming off the #1 World Wide Box Office 2007 â€œFace the Promiseâ€ tour with Bob Seger and the Silver Bullet Band, Alto Reed has made Miami his home and wants to give back to the community locally, nationally and globally! The Hard Rock CafÃ© venue and Alto Reedâ€™s Blues Entourage are available for charity events and fundraisers. For more information please contact Mirielle Enlow 305-798-2393.

About WHY
Founded in 1975, WHY is a leader in the fight against hunger and poverty in the United States and around the world. WHY is convinced that solutions to hunger and poverty can be found at the grassroots level. WHY advances long-term solutions to hunger and poverty by supporting community-based organizations that empower individuals and build self-reliance, i.e., offering job training, education and after school programs; increasing access to housing and healthcare; providing microcredit and entrepreneurial opportunities; teaching people to grow their own food; and assisting small farmers. WHY connects these organizations to artists, funders, media and legislators. WHY is a not-for-profit registered 501(c)(3) organization founded by radio talk show host and present Executive Director Bill Ayres, and the late singer-songwriter Harry Chapin.