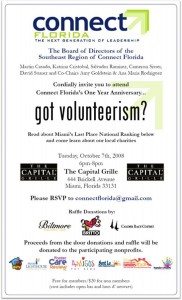 Miami’s vice? City at bottom in volunteering
By MATT SEDENSKY and DAVID CRARY

MIAMI (AP) – Blame it on the traffic. Or the number of new immigrants. Or the allure of the beach. Whatever the reason, Miami has secured the bottom spot – No. 50 among major U.S. cities – in new rankings of the percentage of adults who volunteer.

Nationally, the volunteer rate fell in 2007 for the second year in a row, to 26.2 percent, according to the Corporation for National and Community Service, which is releasing its report Sunday. It showed Miami with a volunteerism rate of 14.5 percent, replacing Las Vegas in last place among major metropolitan areas. To be fair, the study found 620,000 volunteers were recruited in Miami last year, more than 60,000 over the previous year. And many local nonprofits say they have more volunteers than ever. But there’s no denying how far Miami lags behind other cities, particularly No. 1 Minneapolis-St. Paul, with a 39.3 percent rate.
The study notes that Miami’s poverty rate and average commute times are slightly higher than the national average, while other factors influencing volunteerism – home ownership and education level – are slightly lower. Robert Grimm, director of research for the Corporation for National and Community Service (CNCS), said another factor was at play, what he calls “the leaky bucket” of volunteerism. Nationally, about one in three people who volunteer in a given year do not do so the following year. In Miami, the rate is six in 10.

“There’s interest in volunteering in a lot of people but they’re just not staying with it,” Grimm said. Rapid turnover is a problem across the country, and one of the reasons the national rate dropped again in 2007 after reaching 28.8 percent in 2005. In all, 60.8 million Americans 16 and older performed roughly 8.1 billion hours of volunteer service in 2007. On the bright side, the report concluded that “volunteer intensity” is increasing, with 34 percent of volunteers contributing more than 100 hours of service in a year – the highest rate for that category since 2002. On the worrisome side were mounting concerns that economic woes – including high gasoline prices and job insecurity – would be deterrents for some would-be volunteers.

“With more people in need – losing houses, losing jobs – there are more people to serve,” said CNCS board chairman Stephen Goldsmith. “You have fewer people helping and more people needing help.” By region, the Midwest had the highest volunteer rate at 31.1 percent, followed by the West at 26.1, the South with 24.7 and the Northeast at 23.4. By state, Utah had the highest rate, 43.9 percent, followed by Nebraska, Minnesota, Alaska and Montana. Nevada had the lowest state rate, 17.7 percent; Florida and New York were the next lowest. Minneapolis-St. Paul, Salt Lake City and Portland, Ore., were the highest-ranked big cities, while New York City and Las Vegas were the lowest-ranked after Miami. Among 25 mid-size cities, Provo, Utah, came first with a 63 percent rate – the highest of any jurisdiction in the report. The high volunteer rates in Utah and several of its cities are attributed in part to civic-mindedness among the state’s many Mormons, but Bill Hulterstrom, president of the Provo-based United Way of Utah County, said other factors also were at work. “I believe that people here really feel like they can make a difference,” he said. “We do not wait for others to ‘fix’ our problems or neighborhoods.”

The CNCS, an independent federal agency, used Census Bureau data to determine its state and city rankings, which are based on three-year averages for 2005 through 2007. In Florida, Harve Mogul, president and CEO of the United Way of Miami-Dade, said Miami’s low ranking wasn’t surprising because of the number of new immigrants. “We have such a high number of recent immigrants who come from countries without the same organized philanthropy found in the United States,” he said. “We’ve found that as people spend more time in the United States and see the value of philanthropy and community service, they are more likely to donate their time and money.” Still, Hands on Miami, which coordinates volunteer efforts for the local United Way, reported a marked increase in the number of volunteer hours: from 58,232 in its 2006-07 tally to 70,000 in 2007-08.
Lynn Heyman, who heads the volunteer program at Miami Children’s Hospital, said she has 600 active volunteers at any given time, more than ever. But the hospital must hold orientations twice monthly to keep volunteers streaming in to replace departing ones. “I don’t think the days of people volunteering with an organization for years and years are still with us,” Heyman said.

Volunteer coordinators at other agencies point to other possible reasons. Ani Olmeda Gonzalez at Mercy Hospital said the tough economy was forcing some would-be volunteers to choose paid work instead. Charlotte Donn at YMCA of Greater Miami noted the city is home to many transients. And Cathy Agosti of VITAS Innovative Hospice Care noted what many others repeated. “Busy lives,” she said. “Busy lives.”